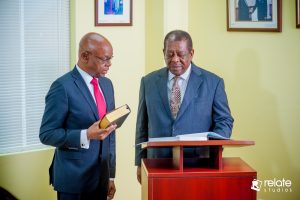 One of two nominated jointly by the Bar or Law Associations of the Contracting Parties, Jamaica – [Article V.1 (g)]

Mr. Michael Hylton, OJ KC was admitted to practice in 1976. After 24 years as an advocate at the private bar, Mr. Hylton was appointed Solicitor General of Jamaica in January 2001.  He returned to private practice in 2007 and has been admitted to practice in Trinidad and Tobago and (by special admission) in The Bahamas and the Turks and Caicos. Mr. Hylton has also served the legal profession in various other capacities including two terms as Chairman of the General Legal Council, a member of the Rules Committee of the Supreme Court and chairman of the sub-committee primarily responsible for drafting Jamaica’s Civil Procedure Rules.