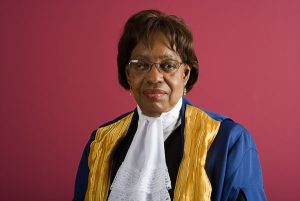 The Honourable Mme. Justice Désirée Bernard, Judge of the CCJ

The Honourable Mme. Justice Désirée Bernard, a citizen of Guyana, read Law at the University of London, graduating with the LLB (Hons.) degree in 1963.  Qualifying as a solicitor in 1964, the then Ms. Bernard engaged in private practice in the High court of the Supreme Court of Guyana from 1965 to 1980.  During that period, she was appointed a magistrate (1970), Commissioner of oaths & Notary Public (1976) and was admitted to the English Roll of Solicitors (1977).

During her long and distinguished career, Mme. Justice Bernard has held memberships in various regional and international organizations, having been the founding Secretary of the Caribbean Women’s Association (CARIWA 1970-1974); first President of the Organisation of Commonwealth Caribbean Bar Associations (OCCBA 1976); member and Chair of the Caribbean Steering Committee for Women’s Affairs, later established as the Women & Development Unit of UWI (WAND – 1978).  Internationally, Mme. Justice Bernard served as both rapporteur (1982-1984) and Chair (1985-1989) of the United Nations Committee on the Elimination of Discrimination against Women during her membership, which ran from 1982 to 1998.  Mme. Justice Bernard has presented many scholarly papers at and participated in numerous international seminars and colloquia both regionally and internationally on a variety of subjects relating to the law, gender and other matters of public interest.

For her exceptional contribution to the improvement of the status of women and to the development and practice of law, Mme. Justice Bernard has received several awards, the most notable being the Cacique Crown of Honour, and the Order of Roraima, Guyana’s 3rd and 2nd highest national awards respectively.  In July 2005, the Honourable Judge was awarded the CARICOM Triennial Award for Women.  She was awarded the degree of Doctor of Laws (honoris causa) by the University of the West Indies in November 2007.  In February 2011, Mme. Justice Bernard was appointed a judge of the Inter-American Development Bank Administrative Tribunal, based in Washington DC, USA.