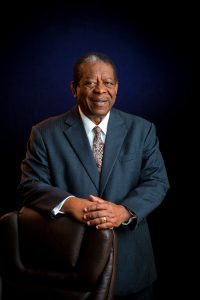 Sir Charles Michael Dennis Byron was born in Basseterre, St. Kitts on July 4, 1943 the first of four children of Vincent and Pearl Byron. Sir Dennis won the Leeward Islands Scholarship in 1960 and went on to read law at Fitzwilliam College, Cambridge University from which he graduated with an M.A and an LL.B. In 1965, he was called to the Bar of England and Wales by the Honourable Society of the Inner Temple.

In 1997, he launched the Judicial Education Institute as a Committee of the Chief Justice’s Chambers. The Committee produced a Code of Ethics for Judges, and organised a series of seminars and training programmes providing orientation for Judges, lawyers and trial Court Registrars. This Programme was a prelude to the modernisation of practice and procedure in litigation, which was brought to fruition when Mr. Justice Byron introduced the new Civil Procedure Rules 2000, which came into operation as of 31 December 2000 thereby introducing caseflow management to the civil process. With these reforms, Mr. Justice Byron set a three‐fold objective, namely, the enhancement of public access to the Court by simplifying procedures, the reduction of the delay in litigation, and the inculcation of a higher standard of professionalism at the Bar.

In March 2001, Chief Justice Byron as he then was, as a member of an international delegation of jurists travelled to Zimbabwe on a fact‐finding mission on behalf of the Human Rights Institute of the International Bar Association, inquiring into reports of abuses against the Rule of Law by the Government. Mr. Justice Byron was subsequently appointed by the United Nations Secretary General to replace Judge Lloyd George Williams, where he served as a Judge of the United Nations International Criminal Tribunal for Rwanda (ICTR) from June 2004. He was elected President of the Tribunal in May 2007, succeeding former President Erik Møse of Norway and was re‐elected for a second term as President in May 2009. As President of the Tribunal, Mr. Justice Byron was responsible for the overall management of the Court and for liaising with Member States as well as the UN Security Council. He led the implementation of ICTR strategic policies and the management of its external relations. While at the ICTR Judge Byron has sat on 7 trial benches and served on a number of pre‐trial benches.

Sir Dennis Byron has a particular interest in judicial education activities. He has been President of the Commonwealth Judicial Education Institute (CJEI) since the year 2000. In 1995, over a five month period, in tandem with Operation Uphold Democracy, in an initiative of the US National Center for State Courts, Judge Byron, with two other international Judges and a support team, organised judicial education programmes for the Judiciary of Haiti. Judge Byron also made presentations to the Judiciary of Suriname for another Judicial Education event geared towards Independence of the Judiciary in 1999.

In 2000, Mr. Justice Byron was knighted by Queen Elizabeth II and he was appointed a member of the Privy Council in 2004. Also in 2004, he was appointed an Honorary Bencher of the Honourable Society of the Inner Temple. Sir Dennis holds the first Yogis & Keddy Chair in Human Rights Law at Dalhousie University Nova Scotia, Canada.

The Right Honourable Sir Dennis Byron took the oath of office as President of the Caribbean Court of Justice in his home country before His Excellency Sir Cuthbert Sebastian, Governor-General of Saint Kitts and Nevis. Sir Dennis Byron’s inauguration comes further to his appointment by the Conference of Heads of Government upon the retirement of The Right Honourable Mr. Justice Michael de la Bastide TC, former President of the CCJ. He retired from the CCJ in July 2018.

He is married to Lady Norma Byron and they have six children.