The CCJ, in its Original Jurisdiction, has compulsory and exclusive jurisdiction to hear and determine disputes concerning the interpretation and application of the Revised Treaty of Chaguaramas (RTC). Article 211 of the RTC indicates that such disputes may arise:

Where such a dispute arises between litigants before national courts or tribunals, the RTC makes provision for the local court or tribunal to engage the CCJ to determine the particular issue that concerns the interpretation or application of the Treaty.

National courts and tribunals are, therefore, key partners charged with ensuring that CARICOM law, that is, the RTC, decisions of competent Organs taken under the RTC and judgments of the CCJ in its original jurisdiction, take full effect and that the rights which the Treaty confers on natural and juridical persons are adequately protected. Article 214 of the RTC mirrors Article XIV of the Agreement Establishing the Caribbean Court of Justice (“the CCJ Agreement”) and imposes a duty on national courts and tribunals to prepare a preliminary ruling reference (a “referral”) if an interpretation of CARICOM Law is needed to resolve a dispute before the national court or tribunal.

Article 214 imposes a further obligation on national courts and tribunals to apply the interpretation of CARICOM law received from the CCJ in making their final decision on the dispute. These duties are reinforced by Article 9 of the RTC, which requires that the Member States, including their national courts and tribunals, take all appropriate measures, whether general or particular, to ensure the carrying out of obligations arising out of CARICOM Law. 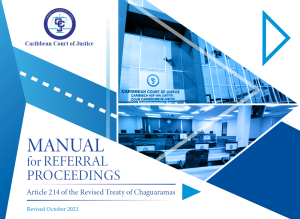 An instructional video was also produced to accompany the manual. You may click here to view it. A Dutch version of the video will soon be uploaded.

A Referral: in greater detail

The judgment given by the CCJ is called a ruling, and it is a judgment specifically confined to the question of interpretation referred to it by the national court or tribunal. Once the CCJ has given its ruling, the proceedings are resumed by the referring court or tribunal. The latter will then apply the ruling to the facts of the dispute pending before it and deliver judgment in that dispute.

If you have any questions or concerns, please send us an email: info@ccj.org