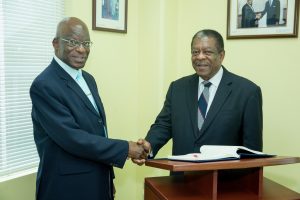 One of two persons from civil society nominated jointly by the Secretary-General of the Community and the Director General of the OECS for a period of three years following consultations with regional non-governmental organizations, Grenada – [Article V.1 (e)]

Dr. Francis Alexis QC was admitted to practice before the High Court of Justice in Grenada on December 10, 1980, having earned his LLM (1976), LLB (1973) and BA (1971) from the University of the West Indies (UWI), Cave Hill, Barbados.  Alexis also holds a Ph.D in Public Law (1980) from the University of Cambridge, England and an LEC (1977) from Hugh Wooding Law School.  Dr. Alexis taught Law at UWI from 1973 to 1983.  From 1990 to 1995 he served as Attorney-General and Minister of Legal Affairs, and on several occasions, acted as Prime Minister of Grenada.  He was appointed Queen’s Counsel in the Eastern Caribbean on August 7, 2008.