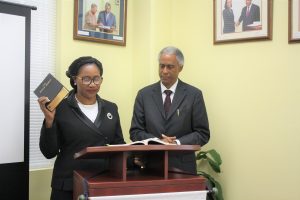 One Chairman of the Judicial Services Commission of a Contracting Party selected in rotation in the English alphabetical order for a period of three years, Guyana – [Article V.1 (c)]

Mme. Justice Yonette Decina Cummings-Edwards began her legal career in 1988 as a State Counsel within the Chambers of the Director of Public Prosecutions. She served in various positions within the Chambers from 1988-2000.  In June 2000 Mme. Justice Cummings-Edwards was appointed a Judge of the High Court of Guyana and in January 2008 she was elevated to Judge of the Court of Appeal.  From December 2015 she acted as Chief Justice of the Judiciary of Guyana and in March 2017 she was appointed acting Chancellor of the Judiciary and currently serves in this position.  She is also the recipient of two National Awards:  the Cacique Crown of Honour (CCH) and the Order of Roraima for her outstanding contribution to the legal field.