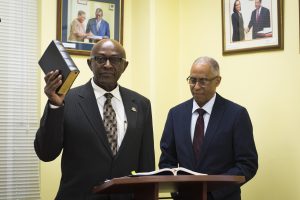 Chairman of the Public Service Commission of a Contracting Party selected on rotation in a reverse English Alphabetical order for a period of three (3) years, Guyana – [Article V.1 (d)]

Mr Michael Somersall joined the Guyana Police Force in the year 1969 as a Constable and rose to the rank of Assistant Commissioner of Police in the year 1992.  While serving in the Guyana Police Force, in the year 1995, he was conferred with a National Award – Disciplinary Service Medal.     Upon successful completion of his Bachelor of Law Degree, Mr Somersall advanced to the Hugh Wooding Law School in the year 2002 where he obtained his Legal Education Certificate and was consequently admitted to the Guyana Bar in October of 2004.  Currently, Mr Michael Somersall sits as the Chairman of the Public Service Commission, and as a member of the Police Service Commission.