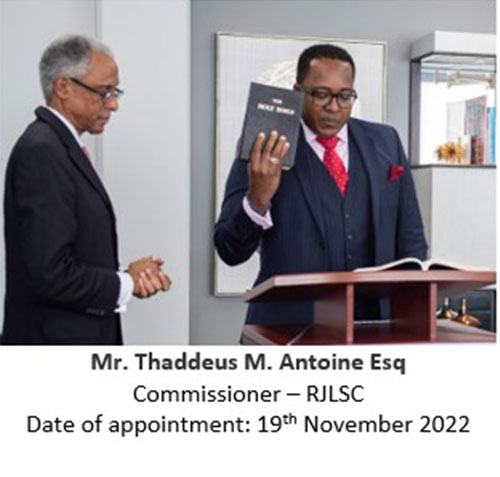 One of two persons nominated by the Bar or Law Associations of the Contracting Parties, St. Lucia – [Article V.1 (g)]

Mr. Thaddeus Marc Antoine Esq was called to the Bar of England and Wales in 2000 with the Honourable Society of Lincoln’s Inn and later that year to the Bar of the Eastern Caribbean Supreme Court – Saint Lucia. Mr. Antoine is the Managing Partner at TM ANTOINE Partners, a General and Specialist boutique law practice which focuses on Civil, Corporate and Commercial Law.  He holds a Master of Laws (LL M) in Corporate and Commercial Law. He served, at appointment of the Honourable Chief Justice of the Eastern Caribbean Supreme Court, as a member of the Bar Disciplinary Committee. He is the immediate past President of the OECS Bar Association, where he also served as the 1st and 2nd Vice President and Treasurer.

Mr. Antoine is a former Senator of the Parliament of Saint Lucia. He is the Chairman of the Saint Lucia Tourism Authority and serves on a number of private and public Board of Directors. He is also the President of the International Financial Services Association of Saint Lucia (IFSA) and the Deputy Chairman of STEP Saint Lucia.