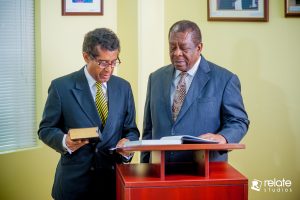 Mr. Delano F. Bart KC is a lawyer and a former Diplomat. He is admitted to the Bars of England and Wales, St. Kitts and Nevis and has rights of Audience before the Courts of the Organization of East Caribbean States in the member States.  He served in the Federal Parliament and Cabinet of St. Kits and Nevis from 1995 to 2006. His professional experience includes the practice of Law in England and Wales from 1977 to 1995.  He served as the Permanent Representative and Ambassador of St. Kitts and Nevis to the United Nations in New York.